You Are Here: Wissenschaftlichen Mitarbeiter am IKDG mit Boie-Preis 2018 ausgezeichnet

As part of the 50th Power Plant Colloquium in Dresden (October 23 - 24, 2018), the Boie Prize for the best junior scientist in the field of power plant engineering was awarded to Dennis Többen. 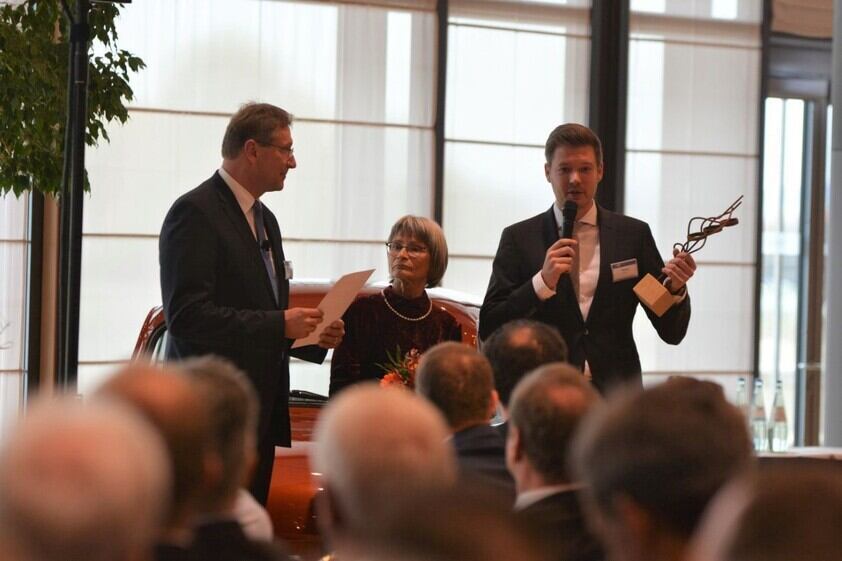 For more than 50 years, the TU Dresden has organized the Kraftwerkstechnis­ches Kolloquium. The annual scientific-technical conference with integrated company fair attracted around 1000 participants to the Congress Center on the Elbe again this year. For two days, speakers from science and industry gave specialist lectures on current and future topics in the energy industry. Based on the contributions of the previous year, the advisory board of the colloquium selected the best junior scientist.

For a scientific study on the "Influence of contact heat resistance on the rotor temperature distribution in a steam turbine during warm keeping operation using hot air", Dennis Többen was awarded the Boie Prize this year. As a research assistant at the IKDG, Mr. Többen deals with experimental and numerical investigations of heat transport in steam turbines. By keeping a steam turbine hot with hot air, the start times of a power plant can be significantly reduced, allowing power plants to be more adequately and flexibly deployed to safeguard grid stability when the power from renewable sources is insufficient. In addition, long preheating times using fossil fuels and thus pollutant emissions and thermal loads during startup are avoided.