You Are Here: 2-shaft and 4-stage Air-Axial-Turbine "Regula" 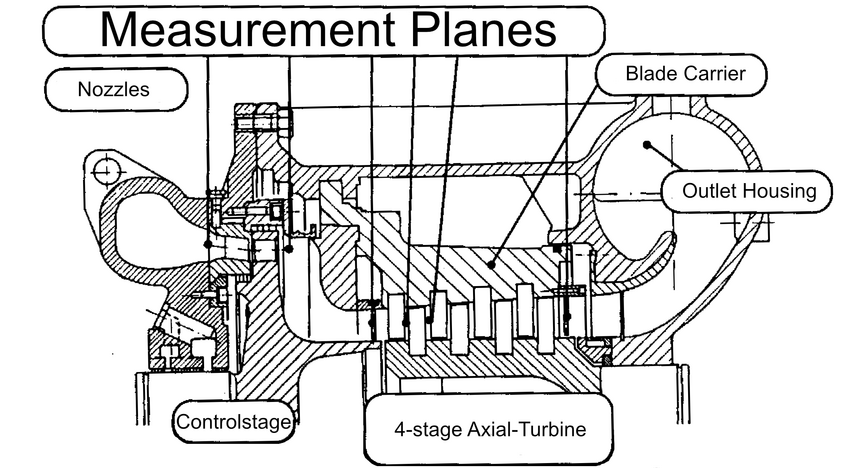 A two-shaft air test turbine, consisting of four nozzle segments, a regulating wheel with an overflow channel and 4 stages, is used as the test carrier.

It contains two shafts which are mounted in a cantilever manner, one of which carries the impeller of the control stage together with the hub contour of the overflow channel, the other the four rotor blade rows of the stages. Separate water brakes are applied to both rotors independently to output their power to, so that the partial performances of the control stage and the stage group can be measured individually. Hydrostatic pendulum bearings, developed especially for this test stand, in which the water brake and the corresponding rotor bearing are mounted in each case, allow an accurate determination of the turbine moments introduced into each rotor.


The compressor system (operating limits of the air supply in the following table) of the IKDG, consisting of two radial compressors, supplies the turbine with air.


The turbine consists of a control stage with impulse blading and four nozzle groups, an overflow channel and a 4-stage turbine section with reaction blading, which in large-scale designs is often built up of 20 or more stages. The outlet housing encloses the multi-stage part with two outflow pipes leading downwards.


On the inflow side of the turbine, upstream of the control stage, there are four nozzle boxes of 2x20% sectors, as well as 2x30% sectors of the entire annular channel area. Each of these sectors is supplied with air from a separate line, which is equipped with an orifice for flow measurement and a control valve. By closing a control valve, a specifical mass defect can be produced. In addition, it is possible to heat one of the supply air streams and thus impose a defined temperature disturbance. Each sector of the nozzle groups is separated from the adjacent sector by a separation point. Due to the design, this separation point has the width of one blade pitch. At full load, the impeller is not charged with 100%, but only with 92.53%.


Currently "Regula" is located at the old location of the IKDG: