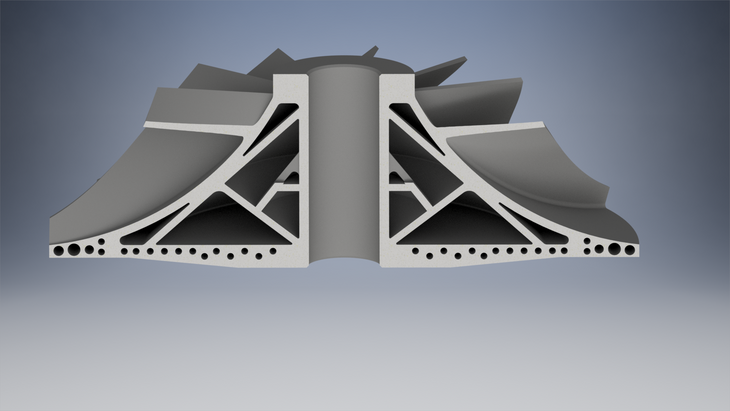 The establishment of a hydrogen economy is a central element in the implementation of the "Energiewende". The success of the hydrogen economy depends largely on two factors: Co2-neutral hydrogen production and the cost-effective transport of large quantities of hydrogen.

The low volumetric energy density of gaseous hydrogen at ambient pressure makes the transport of hydrogen at ambient conditions uneconomical. Therefore, hydrogen is usually compressed to a higher pressure level using positive displacement machines. For very large volume flows, however, turbocompressors would be more suitable, as they are much more compact in design and both robust and low maintenance.

Compared to air or methane, for example, considerably more work has to be put into the fluid to compress hydrogen to the same pressure. In order to achieve a high work input per compressor stage, the circumferential speeds for compressing hydrogen have to be increased considerably compared to compressor wheels commonly used today. However, the centrifugal force-induced stresses would exceed the strength limits of the materials available. One possibility for reducing centrifugal force stresses in the impeller is to integrate cavity structures in the impeller body.

In the course of the project, a concrete lightweight impeller topology is to be developed. Furthermore, design guidelines for generating geometrically similar compressor wheels are to be formulated as a follow-up.

At the IKDG, the loads acting on the impeller during operation are calculated by FEM simulations. Cavity structures, including suitable support structures, are then introduced into the impeller body and optimized in a multi-stage iteration process. The investigations are based on a centrifugal compressor impeller optimized aerodynamically for hydrogen, which was developed by MAN Energy Solutions.

As a following step of the numerical development, the impeller will be manufactured by means of additive manufacturing processes and its strength will be tested in the centrifugal bunker. The insights gained from this step will then be used to further optimize the design in a second and final iteration step.

Testing of the final iteration stage is planned for fall 2022.

The project is financially supported by the BMWi and MAN Energy Solutions.

MAN Energy Solutions is the chairman of the associated project committee.